Biogen’s R&D head is out, following string of clinical setbacks

Biogen has a new R&D leader, announcing Tuesday that Michael Ehlers will leave on Oct. 11 and, effective immediately, pass his duties on to Chief Medical Officer Alfred Sandrock. Ehlers is heading to Apple Tree Investors, a life sciences fund where he’ll serve as chief scientific officer and, for a portfolio company called Limelight Bio, CEO.While the early days of Ehlers’ three-year stint were marked by the approval of Spinraza, Biogen’s now-blockbuster spinal muscular atrophy drug, recent clinical setbacks have cost the company billions of dollars in market value. Most notable is the failure of its prized Alzheimer’s disease drug, aducanumab.According to a company release, Sandrock will continue to serve as chief medical officer in addition to taking on the executive vice president of R&D role. Sandrock has been with the company for 20 years.

Ehlers saw first hand the high risk, high reward nature of Biogen’s business, though his departure comes at a time when the risks have dominated.

Biogen operates in the complex world of neuroscience drugs, which have a poor track record in the clinic. While the company found success in multiple sclerosis and spinal muscular atrophy, its work in Alzheimer’s, pain and stroke hasn’t been so fruitful. 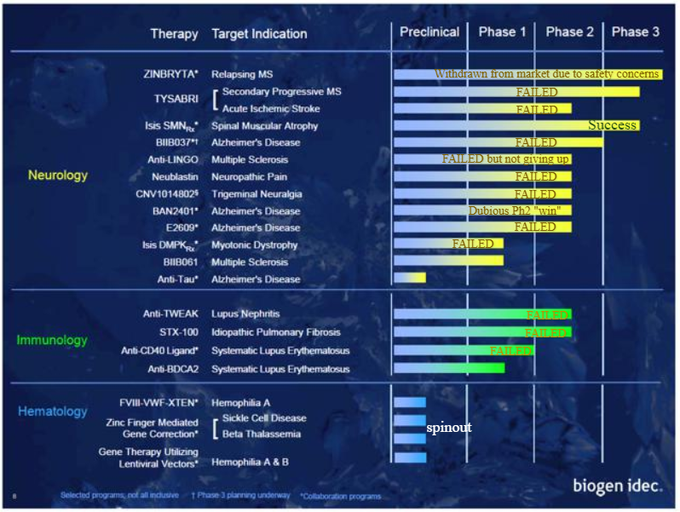 In March, Biogen suffered its biggest failure yet. The company lost more than $20 billion in market capitalization on news that it was halting late-stage studies of aducanumab — an Alzheimer’s drug that, at least by Wall Street estimates, was far and away its most valuable pipeline asset.

The failures have put pressure on Biogen to diversify. By July, company leadership was telling investors that immunology and ophthalmology would be areas of focus moving forward, bolstered by two experimental lupus drugs and the acquisition of gene therapy developer Nightstar Therapeutics.

RBC Capital Markets analyst Brian Abrahams wrote in an Oct. 1 note to clients that, while Biogen’s R&D is in good hands with Sandrock, the departure of Ehlers won’t do much to quell shareholder concerns.

“We believe the departure of a key member of [management] and a face of the company is a loss, and will likely also continue Street skepticism around their riskier, near-term data readouts,” he wrote.

“Additionally, we believe that as the head of R&D, he likely played a meaningful role in BD discussions, and that his departure may further complicate their efforts to vet and bring in new technologies and opportunities so important for [Biogen’s] revenue sustainability.”

Investors appear to have apprehensions too. Biogen shares were down about 1.5% by noon Tuesday.

Ehlers came to Biogen in 2016 after six years at Pfizer, where he held high-level roles in the pharma giant’s neuroscience and pain research unit. In a statement, Ehlers said it “is the right time to pass the baton” at Biogen.

He’s now off to Apple Tree and Limelight Bio, a biotech working on gene therapies for inherited diseases of the brain, eye, liver and muscle. Limelight’s R&D includes “treatments for diseases that cannot be addressed by current gene therapy methods,” according to an Oct. 1 release.

Aside from Ehlers and Sandrock, Biogen announced that it appointed Alphonse Galdes, who joined Biogen in 1995, to head of pharmaceutical operations and technology. Galdes most recently served as senior vice president of asset development and portfolio management, starting in November 2015.